The Inspiration behind the Girls in Tech Mentoring Programme

At Girls in Tech we work hard to support and raise the visibility of women in technology. Through different events and initiatives, like our list of female speakers or April weekend coding event, we are directly reaching women in the industry and fostering a close-knit community in London.

Sessions like these always get a strong turnout and often include many prominent women who are already achieving great things in tech.

Having said that, we care about providing events geared toward those women who do not yet have career confidence – we want to create a community to nurture tech’s up-and-coming women. It is through this desire that the Girls in Tech Mentoring Programme was born. 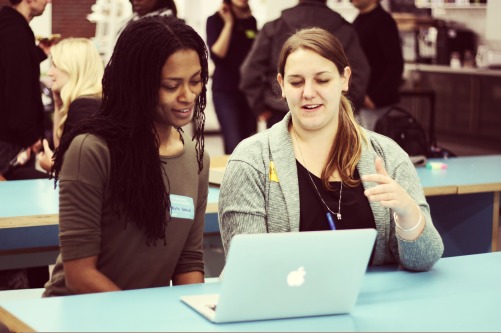 During my time championing Girls in Tech and raising the profile for women in the industry, I have had the privilege to interview many prominent men and women working in the sector. A few interviews stick out and were the catalyst for my inspiration to start the Girls in Tech Mentoring Programme. It was mentioned by multiple industry leaders time and time again that the key differentiator between men and women in tech was confidence – or perceived confidence.

In these interviews it became apparent that women were seen as less likely to ask for a promotion than men. Though this is not always the case, the perception is that women will more likely want to prove themselves to managers to put them forward for promotions, rather than the women ambitiously going after a promotion based on potential. As Kate Heddleston writes it, it is much more a recognition pattern than a societal bias made-up against women.

When looking for new hotshot engineers, founders, or leaders, people default to these stereotypes about past patterns and often look for people who are young, white, or male. Even when we encourage people who are different from past examples to take on these roles, we have a hard time letting go of the patterns we’ve seen and expect them to exhibit behaviuor in line with our idea of success.

It became clear to me that what London is currently missing is a programme that builds not just the confidence of women in technology – those schemes are numerous and already exists – but simultaneously a scheme that encourages career development to become a leader in one’s company. A scheme that could reveal to women their own deceiving behaviours and how to go about gender biases in a non-blaming or victim way.

With this in mind, we have created the Girls in Tech Mentoring Programme.

For this 6 month mentoring scheme we are looking for women who have not yet reached their full potential in the tech industry but yet are working for fast growing companies or scale-ups and want to grab their part before they get drowned in the crowd of new employees.

We want women to become CEO’s of their own companies, or go take risks launching a spin-off of their own. Some people call this “intrapreneurship”. Whatever the word, we are looking for women who feel or are recognised with big potential but don’t know how to go or have not yet been fully aware about it.

The mentoring sessions will be organised with established industry figures. They will cover key topics essential to career development, and more personal topics related to expectations like how to get a raise or tips for building a successful startup.

Our unique mentorship programme will provide a valuable opportunity for support and growth of the next generation of Girls in Tech. After 6 months we hope to look back and see significant career advancements for those who have participated in the programme – increased roll responsibilities, raises, or promotions.

To find out more about the mentoring scheme and how to secure a place as a mentee, please attend our breakfast session at 8am on the 8th of April. More details to follow this week. Get your ticket and see you there!